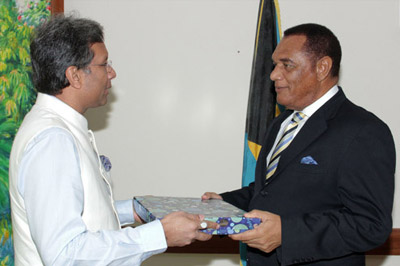 Although China may be stealing the headlines in terms of bilateral relations with The Bahamas at the moment, there is another booming market that is eager to develop ties with the jurisdiction. “India has one of the largest economies,” says Ashish Saraf, honorary consul for The Bahamas in India. “We have 1.2 billion people, with a nine per cent annual growth in gross domestic product. My job as consul is to see how India and The Bahamas can cooperate together, how we can get Indians to invest in The Bahamas.”

A successful industrialist, Saraf is the joint managing director of FACOR, India’s largest private producer of ferrochrome, an essential ingredient for the manufacture of steel and stainless steel. Through his professional and personal life he has become intimately connected with the upper echelons of India’s political and business communities. He was also honorary consul to the Maldives and was influential in getting a direct flight between the two countries established, alongside promoting bilateral trade and cultural exchange.

These successes are something that Saraf is eager to repeat here. At present, trade between India and The Bahamas only accounts for around $40 million per annum. This presents a significant opportunity for growth, suggests Saraf, and efforts are being made to make the business environment more friendly for Indian investors.

At press time, India and The Bahamas were near to signing a tax information exchange agreement (TIEA), part of which includes a double tax agreement (DTA) that Saraf believes could greatly boost bilateral trade. “We have a similar arrangement with Mauritius,” he says, “and a lot of the direct foreign investment that comes into India, comes through that country. When the DTA is in place, why can’t it come through The Bahamas?”

Once the framework is established, Indian investors could look to expand into any number of fields of industry, according to Saraf. “Many people in India see The Bahamas as a holiday and gambling destination only, but our industrial sector has become very diversified in the offshore environment and there is no reason why people couldn’t have their companies here, particularly in fields such as information technology, education, tourism and software development, among others.”

One area that Saraf sees as being very profitable in the future is energy, specifically solar power. “Because of the amount of sunshine The Bahamas enjoys, solar energy is something that Indian power companies would be interested in investing in, provided there was a buy-back agreement to guarantee a return on investment,” he says. “It should be mandatory that large developments use solar power for a percentage of their energy needs.”

Saraf also sees massive room for expansion in tourism and cultural exchange. “We could look at setting up a Taj hotel here. Buy an island and set up the most fantastic centre for yoga, spirituality, and holistic treatments, and market that to the whole of the US. There is nothing like that in this region.”

Similarly, following the success of Bollywood film Blue, which was made in The Bahamas, more Indian movies could be shot here, and tourism would piggyback on that, suggests Saraf. “There are so many areas that could be utilized better,” he adds.

With greater communication and increased incentives, Saraf can see no limit to the amount of direct investment that India can bring to the jurisdiction. “I personally think investment would be substantial in the right circumstances. All we need to know is what The Bahamas needs, and once we know that, we can see what India can supply.”